Much as we hate to admit it (and hate the ‘I told ya sos!’ after we refuse to listen), mums and grandmums alike, are usually right.

My mum (aka mama Gail) was recently right –again – when she recommended I give Sea Buckthorn oil a whirl for my skin breakout issues.

Initially, I was like, Sea Buck WHAT,  quick to put down a crazy sounding something or other I’d never heard of.

But as is her way, mama Gail patiently explained that women in our family had been using the oil for generations, predominantly in supplement form, and that it was a best kept healthy beauty gal secret that really worked. She promised that it would not only help the breakout issues, but that I would GLOW.

Desperate to curb breakouts and a sucker for glow, I bit the bullet (or rather Buckthorn) and purchased an organic vegan version of the supplement from New Chapter (see below) and proceeded to take two capsules a day, with a meal. 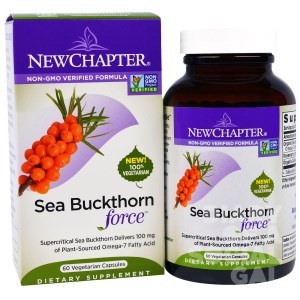 My pesky annoying grownup breakouts have greatly diminished, and, as promised, there is indeed a certain glow that’s set in and prompted recent welcome compliments  and enquiries like: What are you doing differently, what products are you using … who are your people? 😉

As for the oil’s effectiveness, here’s the bottom-line backdrop:

3. SB is also incredibly anti-inflammatory, root cause of all dis- ease, including acne.

So, what’s the moral of the story? Listen to your all-knowing mums, and grandmas … and get yourself some Sea Buckthorn.

ON THE TEA FRONT …