Though this is a day of beauty in Diary world  (aka MAKE-IT-UP MONDAY) and we usually talk up a beauty product or trend, today, a shoutout is in order to the courageous songstress/performer HALSEY.

Despite participating in the ever epic annual Victoria’s Secret Fashion Show that so many anxiously look forward to every year (myself included) for its sheer theatrics and over-the-topness (this year’s edition featured Shawn Mendes, Bebe Rexa and The Chainsmokers and supermodels like Kendall Jenner, Bella Hadid, Gigi Hadid, Behati Prinsloo, Winnie Harlow, Adriana Lima  and more), the artist could not stay silent in the face of appalling comments made by PR vice-president and a chief architect of the show, Ed Razek, after it was filmed on Nov. 8th.

When asked by Vogue if the show would include a transgender model, he replied: “Shouldn’t you have transsexuals in the show? No. No, I don’t think we should. Well, why not? Because the show is a fantasy. It’s a 42-minute entertainment special. That’s what it is. It is the only one of its kind in the world, and any other fashion brand in the world would take it in a minute, including the competitors that are carping at us.”

While the term  “transsexual” is itself unacceptable (outdated and disrespectful) and didn’t sit well with many, the comments themselves were outrightly horrifying and spawned a major backlash that culminated in the resignation of Victoria’s Secret CEO Jan Singer, in the face of a major hit in sales.

Halsey, a fan of the event since childhood and initially so thrilled to partake, was justifiably mortified and penned the following on Insta after the statements were published: 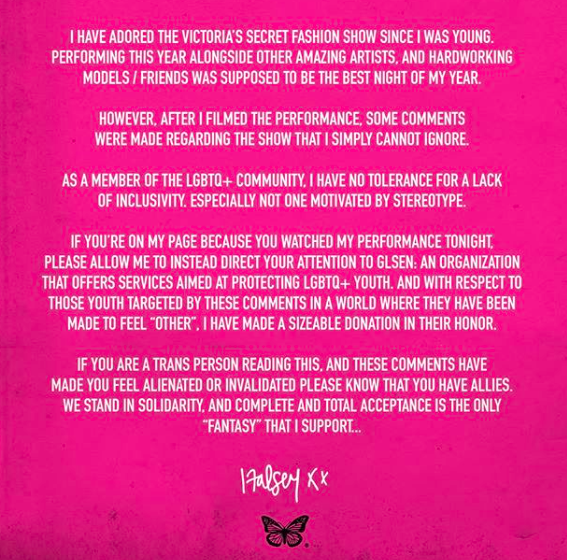 The much-anticipated show aired last night and, full disclosure, I did tune in to part of it and what I caught was as entertaining and performance-fabulous as ever, as the supermodels swished down the catwalk in glorious costume-enhanced lingerie getups with their signature swizzle and fashitude.

That said, the event could no longer resonate for me in the same way as I marvelled over the models that weren’t there, and the gorgeous diversity in our world that should be reflected on the runway.

True beauty embraces our differences and is INCLUSIVE  … a close relative of love.

And so, today, when I would normally go on about the beauty trends, and glam, and sass of the eve’s catwalk, I choose, instead, to pay homage to Halsey; a human that embodies the kind of real beauty we should all aspire to. #TEAMHALSEY #TEAMLOVE 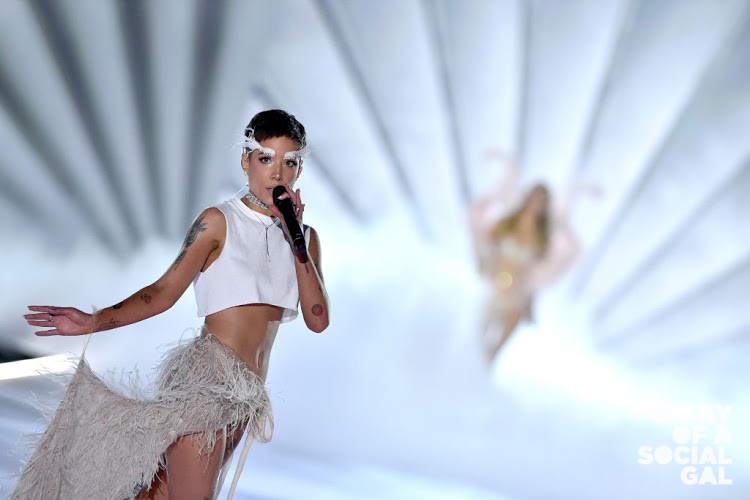