And the fab debrief from the big day continues! For your post nuptials enjoyment, royal wedding expert and British bridal designer, Caroline Castigliano, who was on-site at Windsor Castle covering the royal wedding, weighs in: 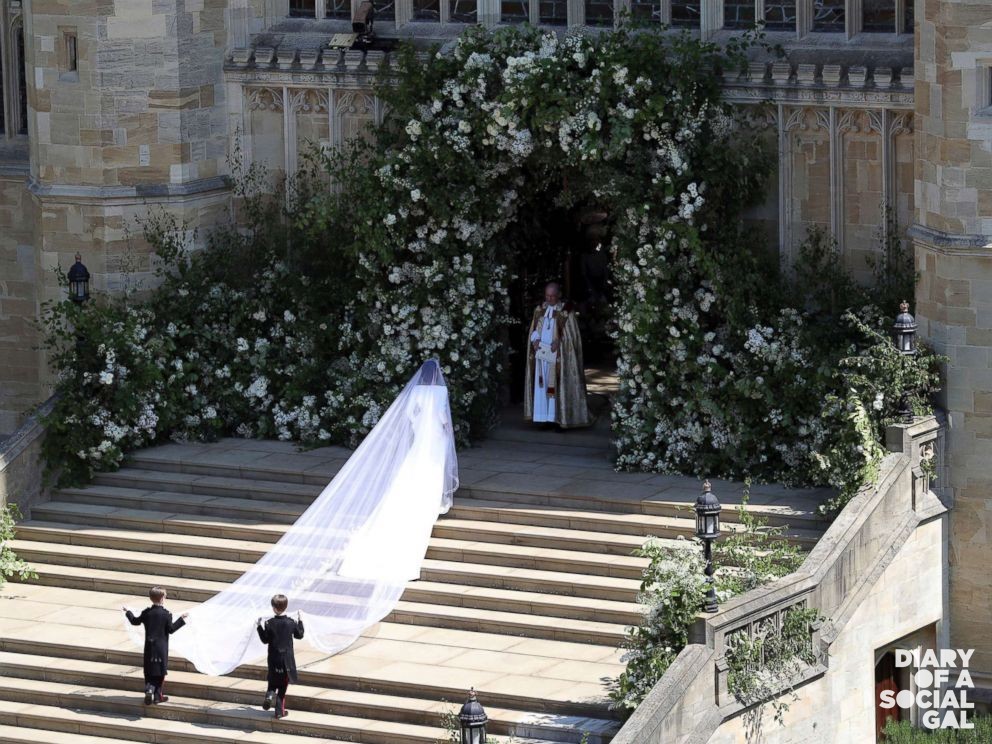 What do you think of the outfit overall – dress, veil/tiara, shoes etc?

We have been counting down the days speculating the Royal dress designer and Meghan has made her moment in history wearing Givenchy, Clare Waight Keller …

Meghan has made her entrance in a minimal gown and has certainly differentiated herself from Kate who did it all in lace! Meghan has brought the splendour here with a long veil …

Meghan looks thoroughly modern with her choice of gown and has given her nod to the Royal family and Queen by following the Royal tradition of covering her shoulders and a long sleeve!  She entered St Georges Chapel – a moment of history in a simplistic style …

The boat neck wedding dress is a wonderful style. It’s a wide neckline that follows the curve of the collarbone and ends at the shoulders.

Her hair is gorgeous in a low swept bun!

Meghan is a fresh young American with a million dollar smile the cameras love and she looks fantastic entering the British establishment in a fantastic gown.

Meghan is going into a family that has been seen in the public eye for 1000 years and has definitely made her mark with this wedding gown … which is quite remarkable in the way it’s so simplistic compared to other dressed we have seen on Diana and Kate!

Meghan has had the world in suspense with what she will wear, and with such high expectations on her, she has not failed to disappoint …

Meghan has certainly created a name for herself fashion wise – she is following in the footsteps of Diana who was a fashion icon in the public eye for 16 years … and has done a fabulous modern job!

Royal brides are normally expected to support British designers in the UK rather than choosing a designer abroad but Meghan has gone with a French luxury design house here which is a different choice from other Royal brides.

The whole wedding is picture perfect and fairytale like with all of the bridesmaids looking fabulous!

Is it what you expected/predicated?

I believed the gown would be a very straight, fitted dress, with a big 9-foot train coming off the dress from the side to create the drama.  I did think she would have a bit of lace and there is some lace detailing on the veils.

I predicted Meghan would have some kind of edge to her wedding dress, but I was certain Meghan’s dress would be classic, elegant with traditional features.  I predicted Meghan would give a big nod to the Queen and Royal family with covered shoulders, a long sleeve and high back. But I was expecting Meghan would show her personality by wearing a fitted dress and we haven’t seen a Royal wearing a fitted gown for a long while … I thought a fitted gown would be the way Meghan showed her personality alongside respecting Royal tradition when it comes to Royal gowns.  The gown is certainly more fitted than other brides we have seen!

Initially we thought the gown would be Ralph & Russo, but the brand has been in the press a great deal ahead of the wedding, which is an unusual move if they were actually the designer.  Ralph & Russo gowns are super expensive so wearing a 100k gown may have seemed ostentations to the public.

Yesterday, our bets were on Stella McCartney, but as Oprah and Amal Clooney both arrived wearing Stella, that was a surprise to us and we thought it must be a different designer if they are wearing Stella …  I thought Stella was such a perfect fit for Meghan as Stella used organic fabrics and her ethos is very much the same as Meghan’s!

Meghan has totally surprised us wearing Claire Waight, Givenchy!  This was totally not talked about in the press at all and they kept it all top secret!

How does it compare to the Duchess of Cambridge’s dress?

The Duchess of Cambridge’s dress was one of lace decorum – she looked super elegant as a bride and Kate gave us a Royal dress to remember.

Meghan has a totally different style to Kate when it comes to her hair. Kate loves a good blow dry whereas Meghan prefers wearing her hair up!

Is the dress similar to any other royal wedding gowns? (eg Kate’s was compared to Princess Grace of Monaco’s.)

Kate Middleton’s gown took a style lead from Grace Kelly’s dress, the intricate applique bodice and sleeves of Catherine’s mirrored the wedding. The similarities don’t end there. Both gowns shared a high-waist, full-skirt and a long dramatic train and both wore a sheer veil and diamond tiara!

I would say that Meghan has gone quite Wallis Simpson (almost royalty). Wallis’s dress was designed by Mainbocher, it was very modern in its time, much like the look Meghan has gone for. The gown was made of a crepe silk and featured a long slim skirt much like Meghan has gone for here. Wallis was known as a fashion weapon and was a super glamorous art deco women!

How does Meghan’s dress compare to the one she wore in Suits and the dress at her first wedding?

This is the first time we’ve seen a Royal bride very publicly in a wedding gown – since Meghan’s on screen character Rachel on Suits got married.  Meghan’s gown is totally the opposite to what we saw in Suits, which was a v-neck gown by Anne Barge, an Atlanta based designer.  Her wedding look in Suits was quite bohemian and Princess like compared with Meghan’s demure look today. In complete contrast, the wedding gown on Suits was beaded and accessorized with a black belt and Meghan has gone the total opposite today with a minimal accessories and a plain look! Her gown in Suits was certainly sassy but she has had to please the Queen and country today and opt for tradition.

WHO WILL SHE WEAR?

YES WE HAVE MEGHAN’S PRE-WEDDING WORKOUT

ON TOP OF THE ART WORLD