Sure. I could have penned a conventional piece on talented artist/visionary SCOOTER LAFORGE and gone into considerable detail about his many coups in the art world, both in San Francisco and his current home base in New York; I could have elaborated on his compelling, in-your-face style, consistently thinking outside the box to craft impactful provocative works. But that would have been so regular, so seen it a million times. Which is why an interview with the sassy, spectacular Scooter, in town this past summer for a solo show at Galerie MX, and a turn at the prestigious Festival Mode & Design – while he was being tattooed – was such a refreshing departure. Shall we? 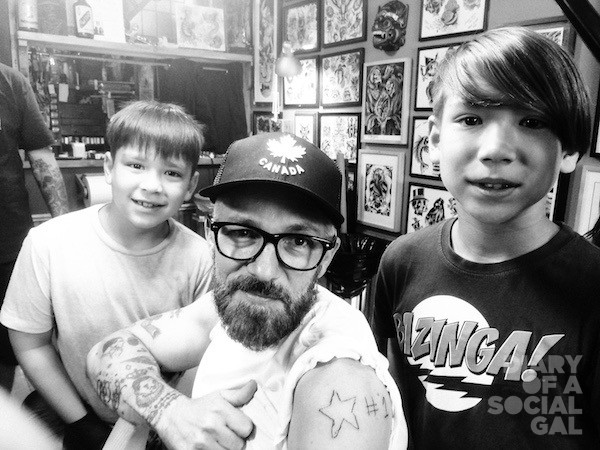 How fabulous Scooter: a gifted influential in the art world like you, breaking from the festival and show to get inked! What art will you be embedding in your temple today, and why?

I left full artistic freedom and creative expression to Hendrix and Cash (sons of new photographer pal Neil Mota). So whatever came to them and was inspirational in the moment, and whatever they were thinking about was the path. I let go of everything. 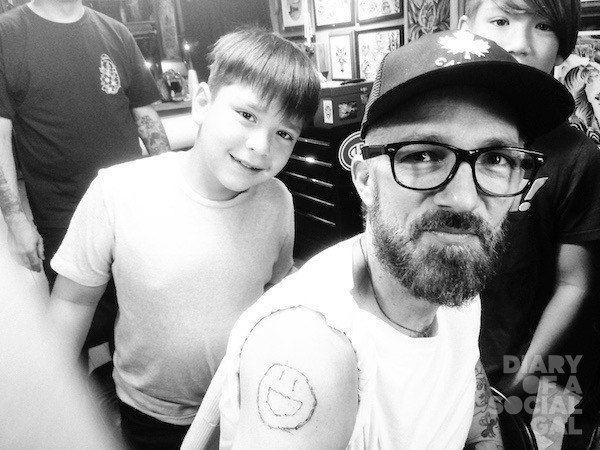 Kid tat designers! I love it. How did this come about?

When I first met Neil, he was with his sons, and they really responded to my head-to-toe Stephen Sprouse look. And then, when Neil was taking my photograph for the festival, Hendrix and Cash accompanied him, with baseball caps in hand, and asked if I’d draw on them. I was so touched, I asked them to draw on my shoes. After seeing some designs they’d created for several of Neil’s tattoos, I expressed a desire to do the same with images they’d drawn for me. The next thing I knew, Neil hooked up this whole experience.

Wow, Neil is so awesome!

Yes, the whole family is. We had an isntant rapport and connection like I did with you. I really wanted to make this interview happen. 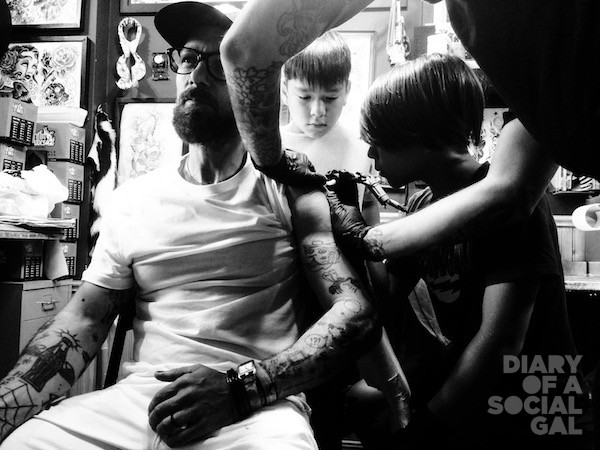 Awww, likewise. You make me blush. So glad it’s happening, and at the tat parlour, no less. Now, today is about body art (specifically your body art), but you also routinely transition from canvas to clothing, embracing the creative potential between the worlds of art and fashion. Why that particular journey?

To be honest, this journey, as impassioned as I am about it, originally came out of a financial need. I was printing on t-shirts to make money, and selling them on the street.

About six years ago. And then, when I decided to venture out on my own and be a full-time artist, I made t-shirts and sold them to friends, which slowly but surely took off. Eventually, Miley Cyrus got one, and Iggy Pop as well. So the evolution was natural and organic, and the interplay between fashion and art has been a big part of what I do ever since.

Curiosity killed the Social Gal, who couldn’t find much on your career history. What were you doing before pursuing art full time?

I was actually a full-time salesperson at Jimmy Choo on Madison Avenue, and at one point was the top salesperson globally. I loved the job, but have always wanted to be a full-time artist. That was the dream. I’ve been painting since I was six, and eventually had to go with it, so I left the job.

Clearly a man of many talents whose earlier career path underscores a love for fashion, and informs the current collabs. Scooter, your creations have been purchased – and, of course, worn – by some of the globe’s most recognized and successful humans (Beyoncé anyone?). Who “in your art” and “with your art’ has freaked you out the most, rocked your world, like “OMG, blank, blank is a fan?”

I would say the designer Walter Van Beirendonck freaked me out the most when he asked to collaborate, because I’ve been following his career since the ‘90s! One of the most exciting moments of my life, hands down, was when he sent me most of the line from that collection (the spring/summer 2015 menswear line, WHAMBAM collection). Getting that box in the mail and opening it was exhilarating, one of the most electrifying moments of my life to date.

What other creative collabs stand out and why?

Working with Patricia Field has been extraordinary and rewarding on many levels, professionally and personally, because she’s such a visionary, and is one-in-a-million. While Patricia doesn’t call herself an artist, to me she is a brilliant artist. She possesses artistry in so many ways, in the forms of entrepreneurship, visionary, and craft. Sometimes she tells me how to paint items, and gives me pointers and tips on how to paint garments too. You have to keep in mind that Patricia has been doing this for over three decades, and has been at the top of her game throughout, which is remarkable and inspiring. She is truly gifted, yet incredibly humble. She sticks close to her friends and family. So when she calls you “friend,” it’s important. That was one of the biggest blessings for me, because she’s so faithful to her friends: one of her many qualities.

I had the pleasure of sitting down with her as well, and that generosity of spirit and modesty were very apparent. Scooter, this edition of the mag boasts a design theme. If you were going to design the perfect backdrop for an over-the- top party, how would that go down?

I would probably do an insane circus theme with crazy clowns and high-wire acts. It would be a circus on acid. That would be the theme.

Of course you would. Thanks for this soul-re-plenishing outta-the-box sit-down. You rock! 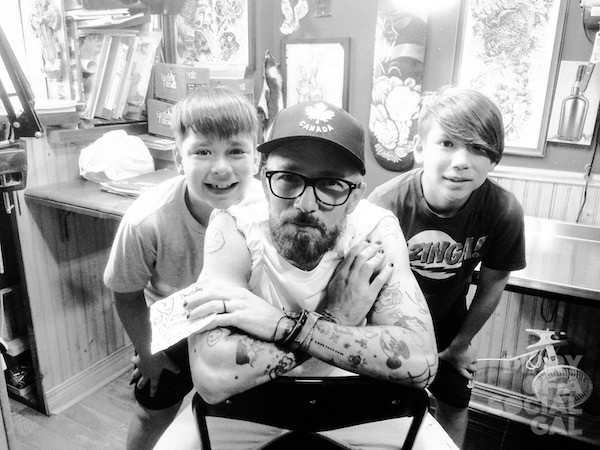