As a frequent guest and partygoer with a yen for good bubbles, I’ve often wondered about the history of champagne. Who was at the heart of this revolution for revelry? When, exactly did the first established house of champagne open its doors?

Curiosity satisfied! At the beginning of it all, in early 18th century France was a young man named DOM THIERRY RUINART, who spent his first 23 years of life in the region of Champagne. A brilliant historian, theologian, and creator, he eventually sought to broaden his horizons and relocated to Paris. Not surprisingly, the cultured and worldly city proved enormously educational and enlightening for Ruinart and it was here that he learned of a new wine with bubbles, which at the time, had yet to be christened champagne.

While well versed in history and the arts, Ruinart also had a keen business sense and soon became rapidly convinced that the pioneering new formulation produced from his native soil would enjoy a bright and promising future. Buoyed by his discovery, he shared this conviction with his brother and then his nephew, NICOLAS RUINART. This last exchange proved to be history making. Nicolas also possessed a shrewd business sense and, inspired by his uncle, founded the very first house of champagne in 1729: what is now commonly known as the House of Ruinart. Indeed, the move was so strategic and successful that in just six years, he went from working as a Reims draper to focusing all of his efforts and energy on the champagne trade. A turning point in the world of wine was officially underway. Go Nicolas!

THE LEGACY LIVES ON

Today, the legendary house lives on in all its glory under the direction of cellar master FREDERIC PANAIOTIS. Responsible for all the famous Ruinart varieties on the market including Dom Ruinart and the Blanc de Blancs, he works diligently and with great passion and precision to ensure the perpetuity and expan sion of the first house. 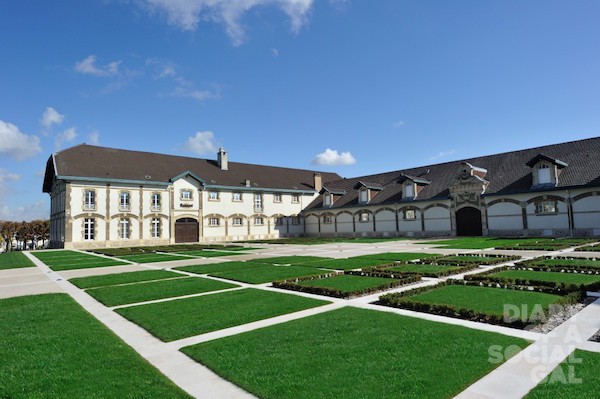 Finally, as we trace some of the history of champagne, it’s interesting to note that the first house of champagne has always had a predilection for, and attachment to art and design that dates back to the birth of French Art de Vivre during the “Age of enlightenment” in the 18th century. Clearly, the magic of the “salons” and the great discussions about philosophy, poetry and music that unfolded within them, were not lost on the cultured champagne makers.

In 2015, Ruinart’s connection to the domains of art and design stands strong as the house routinely seeks out and supports creative initiatives across the globe. Freedom of expression is pivotal to it and artistic collaborations are a priority.

While the first of such imaginative collaborations harks back to 1896 when Alfons Mucha, a pioneer and mastermind of the Art Nouveau movement, created the first ad for a champagne house for Ruinart, more recent alliances have been successfully entered into with influential artists including Gorgia Russell, Piet Hein Eek, Hervé Van Der Straeten, and Maarten Bass, to name a few.

This year, a key creative partner was Hubert Le Gall. The master of his craft used a series of 12 sculptures to pay homage to the evolution of Ruinart from its origin in the vineyards of Champagne. Another key theme for him in bringing the series to life was the passage of time, as marked by the rhythm of the seasons and work and passion of man. In that con-text, vines emerged as a symbol around which seasons flow in a consistent way, yielding the transformations integral to the birth of cham pagne.

Leave it to champagne to fit so well into our design-themed world. 😉 #Perfection.